This is probably going to be a bit long, so get yourself a hot beverage, sit down and have a read.

Like virtually the entire world, I was sent home on March 19th and told to “Socially Distance” myself from others. OK; Interesting. The non-stop cacophony regarding the COVID-19 pandemic from the Main Stream Media (MSM) had begun, and the short term implications were fairly ominous. The one thing the MSM revels in is what we call FUD in the technical business. Fear, Uncertainty and Doubt. But enough of that, this is about an awakening, of sorts.

The first days were filled with a mixture of splendor/dread emotions. Being off of work was awesome, but the world was in a panic and we were as well. Retirement isn’t far down the road, and we watched as the financial markets buckled under the pressure of the current events. It came to a point where, for our mental well being, that other things must fill our thoughts.

We have lived in our house in Northern Virginia for nearly 13 years and a plethora of rainy day projects had accumulated, so the first reaction was to start to slay those projects. Furniture needed gluing back together, a chest of drawers needed a new set of drawers built, the “Snake Cage” inherited from Muzzie needed a back. The biggest of the wood working type projects was completion of a Grand Mother clock case started several years ago. All done, or nearly so at this juncture.

The biggest of the rainy day projects was, however, the image warehouse that has been accumulating for the past 20+ years. There has been a digital camera in the house since the summer of 1999 when my Father-in-law gifted us one for our anniversary. In all that time, never once has an image been purposely deleted. All of them, with a few notable exceptions, are dutifully stored on an NAS box backed up to Amazon photos in the cloud.

Initially these images documented our personal lives. As the camera, a Kodak DC280, was merely a point and shoot, that’s what it excelled at, and that’s what we used it for. Photography as an expression of art has been in my life since college, only mostly on Tri-X negatives or ‘chrome slides in those days, but this camera really didn’t foster that type of thinking. The images captured with this point and shoot were nothing fancy, exciting or artistic, just shots at birthday parties, Christmas, Easter, whatever. Wonderful snapshots of the family as we went about living our lives.

This process continued for the ensuing years, with the notable occasion of a new camera showing up. The cursory capabilities whetted an appetite not felt since a much earlier time in my life. As the industry matured, a sequence of cameras with more sophisticated capabilities flowed through our lives.

Initially it was an Olympus E-10. At the time, the E-10 was a great deal for the price. It lived with us for a couple of years, but honestly it’s weaknesses severely hampered it’s usefulness and my willingness to deal with them. Work arounds were devised and discovered, and a respectfully impressive volume of work was captured with the Olympus. The Kodak was still a faithful companion, but the E-10 came out for “serious” purposes. The Olympus taught me about RAW files, EXIF data and a whole spectrum of the technical issues of digital imagery. Warehousing of the imagery had been a bit helter skelter up to this point and while I’d like to say it was resolved, the best that can be said is it got better.

In the spring of 2004 a Nikon D-70 arrived thanks to Buddy and that was when the renaissance truly began. While still being used for documenting our family lives, shots with a different purpose began to populate the CF card filling it’s memory slot. The ability to capture an entire day’s worth of images, controlling aperture and shutter speed was intoxicating. The numbers of captures began to escalate to where there are significantly more D-70 images in the inventory than the total of the previous shots, with many of them being more of an artistic bent. Images captured for the sake of capturing the vision, not merely to document a family event.

A short time later a maelstrom named Katrina arrived in my hometown of New Orleans. My family and I watched the drama unfold from the safe confines of the Country Inns and Suites in Humble, Texas to our horror. In our haste to bug out, a USB drive was connected to the RAID server containing all the images captured to do a backup. In the hysteria, using Robocopy to do the backup, the to and from values into Robocopy with the /MIR command were reversed. So a blank USB drive was mirrored to the RAID server wiping out all the images without my knowledge.

Once we arrived at the hotel in Houston and began settling in, the USB drive was connected to my laptop and I was dumbstruck by the stupidity. Unfortunately, at this point there was nothing to be done but watch. A couple of days after the storm, a friend called to say our house had been flooded in the aftermath. We lived in Slidell, LA on the north shore of Lake Pontchartrain. The eye of the storm had drug a plug of water with it, which came ashore with the hurricane. In total, 10 1/2″ of water entered the house and flooded the RAID server which was on the floor.

Upon our return to Slidell, after a quick clean up, the first order of business was the server. The chassis was corroded and there was muck everywhere inside the box. Luckily, I knew what to do as I’ve worked in the ROV business virtually my entire professional career. WD-40; Water Displacement number 40 to the rescue. The two Maxtor drives and the SCSI interface card were stripped of the corroded mounting hardware, cleaned up and placed in a plastic bag with a pack of desiccant for later.

Some months later, the IT manager at the office offered the use of a desktop computer that had been taken out of service to attempt to rescue images off the Maxtor drives. The two drives and the SCSI card were plugged in and fired right up. Unfortunately, there were no pictures as they had been deleted with the botched xxcopy attempt. PC File Inspector came to the rescue and all but about a dozen images were recovered! These two Maxtor drives had been in 12″ of brackish water for nearly an hour and yet they fired up and ran long enough for me to recover and then copy my 8,000+ image files. An e-mail was sent to Maxtor telling them the tale, and they asked if the drives could be sent to them for forensics. LOL!

Anyway, during the period of recovery after the storm, which I overheard described as “The longest year of my life”, a Nikon D200 with an 18-200 zoom made it’s appearance. The D70 was gifted to my daughter for a trip to Europe and she still has it. The D200 went on to capture many, many memorable images in the ensuing years.

Through what seemed like herculean efforts at the time, the house was put back together and we were able to move back in and resume semi-normal lives. But things had changed and there was no going back. The company I worked for finally admitted they had no earthly idea what to do with me and released me from their employ in January 2007. Through a happy confluence of events, we departed our home state of Louisiana and migrated to Northern Virginia, where we now reside.

In the ensuing years, the D200 slowly, but surely stopped being a faithful companion as the bulk and weight began to make itself known as I grew older. This was exacerbated by the battery grip that did wonders for the battery life, but made the weight/bulk even more of an issue. There was simply no motivation to carry it around. 2011 and 12 were particularly bleak years in the amount of imagery accumulated.

Fuji had announced the X100 a couple of years earlier and while I was interested, the motivation to jump from the comfortable Nikon experience was simply not there, yet. Fast forward to the announcement of the X100s, and I was on the preorder list at Amazon. A bit of a gulp pricewise, I just couldn’t help myself. Unfortunately the camera showed up about a week before I was to make an extended overseas trip for work and I decided to leave the Fuji at home.

Upon returning some 6 weeks later, the Fuji was embraced with enthusiasm. The size, weight and general handling characteristics were outstanding. Having it with me as we went about our activities in the NOVA area was awesome. What wasn’t awesome were the images. Out of focus, under/over exposed, etc, etc. It became very clear that many things were going to need to be relearned. So the process began with a lot of time being inserted into the image making process getting the focus, exposure settings correct.

To be honest, this took a LOT longer than I would have expected. Many of the images collected over the ensuing months were, as we say, “sub-optimal”.

I do quite a bit of business travel and found myself in San Diego in the spring of 2014. After some meetings, I had a couple of hours to myself and went down to Point Lomo State Park south of town.

When I got there is was bright and sunny with nary a cloud in the sky. The light was a bit harsh, so the images collected were pedestrian at best. As the afternoon wore on, the weather began to come in from the Pacific. A full blown storm was coming. You could see it and smell it. Being from coastal Louisiana we all learned to sense the signs of impending weather and I’ve always found the smell the most significant attribute of a weather event.

In any event, I had wandered up the coast a bit and the weather was really threatening. I found myself at the bottom of the cliffs overlooking the ocean and the light was simply magical. There was some concern in my mind about exposure, so I turned on the bracketing and began firing away.

Upon return home, the images were imported into LightRoom and there was an amazing sequence to behold. Three of the bracketed images were selected, imported into HDR Efex Pro and merged together with just a bit of tweaking. And this is what emerged: 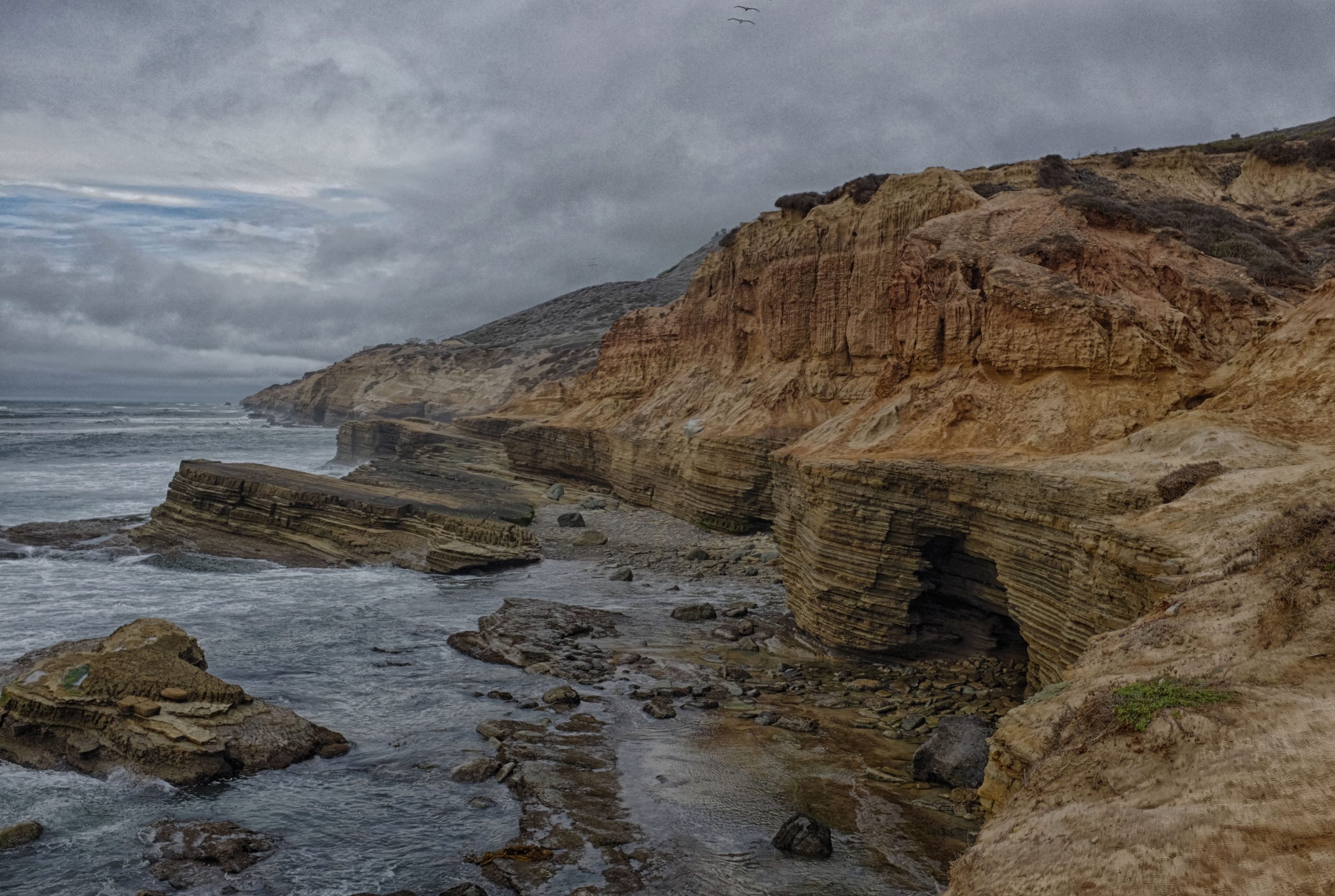 This was far and away the best image I ever made. So I knew that the Nikon gear could now be disposed of. It was all listed on the ‘bay and has left my life. The gear served me well, but there was a new sheriff in town, Fujifilm.

This has gotten way longer than I expected, so I’ll continue in the next post